On the eastern bank of the River Jordan

On the eastern bank of the River Jordan, Pope Benedict XVI stood on May 10, 2009 and laid the foundation stone of the Catholic Church at the Baptism Site.

Two days earlier, during his first meeting with His Majesty King Abdullah II and the extended Jordanian family at Amman Airport upon arrival, he said: "I will visit in a few days, the Baptism Site of Lord Jesus Christ at the river that gave its name to this land. I will be happy to bless the first stone of the two churches that will be built on the traditional Baptism Site of the Lord."

He added, "The possibility to have the Catholic Church in Jordan build edifices of worship or churches is evidence of respect for religion in this country, and I would like to express in this regard the most sublime feelings of appreciation for this great openness."

He continued, "Certainly, religious freedom is a basic human right, so I hope--while lifting up heartfelt prayers-- that the inalienable rights and dignity of every  man and woman be respected and preserved not merely  in the Middle East but throughout the world.'' These were the words of Pope Benedict, so it was not surprising to see His Majesty King Abdullah II and Her Majesty Queen Rania Al Abdullah stand next to him when he laid the  foundation stone of the Baptism Site. The world highly valued this position and made international media laud a Muslim Arab leader who participates in laying the foundation stone of a church in his country.

Jordan is a country that respects religions and a country where religious dialogue has begun since the 1980s. Thus, when His Majesty the King stood a few days ago at the eastern bank of the River Jordan to  address CNN--also not far from that Church whose foundation stone was laid 14 years ago--he carried his concern which was not confined to Jordan, but also of the Jerusalemites and the Palestinians of the east in general. Consequently, when a journalist asked me a few days ago about the harassments that the Christians face which make King Abdullah II warn against such harassment aimed at Christians,  I told him that King Abdullah II neither carries only a Jordanian concern and nor talks about the harassment the Christians face in his country, but he rather talks about the harassment suffered by Christians in Jerusalem and Palestine in general due to the decades-old occupation of Palestine. He also talks about  Christianity which has been exposed to marginalization--and occasional persecution--in some neighboring countries especially in Iraq and Syria where political circumstances and violence have forced citizens to leave once and for all.

Reverting to the words spoken by Pope Benedict when he was in Amman, he said:" My visit to Jordan is a great opportunity to express my deep respect for the Islamic religion and to praise the role of His Majesty King Abdullah II in promoting better awareness of the values proclaimed in Islam," and with the elapse of years since the publication of the Amman Message and the message of the common religions in Amman we can say that these noble initiatives have produced good results in favoring and consolidating the alliance of civilizations between the Western and Islamic worlds, thus refuting the claims of those who promote the inevitability of violence and conflict.

Actually the dear Pope,  whom the international community bids farewell these days, added:"The Kingdom of Jordan has long taken the lead of  launching good initiatives aimed at promoting peace in the Middle East and in the world by fostering interreligious dialogue, supporting efforts to find a just solution to the Israeli-Palestinian conflict, hosting numerous refugees from neighboring Iraq, in addition to its relentless endeavor to curb extremism." The late Pope visited King Hussein Ibn Talal Mosque and met with Muslim clerics led by His Royal Highness Prince Ghazi Ibn Muhammad.

In this regard, we remember the late Pope while praying that God will have his soul rest in peace, as well as thank him for his appreciation of Jordan, for his four-day visit to our holy country, and for the Synod he held in 2010 in defence of Christianity in the east. We also highly value the efforts exerted by His Majesty King Abdullah II, who made the far and wide praise Jordan for its pioneering role in interfaith dialogue, and also for the concern that His Majesty the King holds on his shoulders with regards to preserving Christianity in this region, that has been subjected to mammoth harassment, and will continue to find in His Majesty the best supporter and the noble defender. 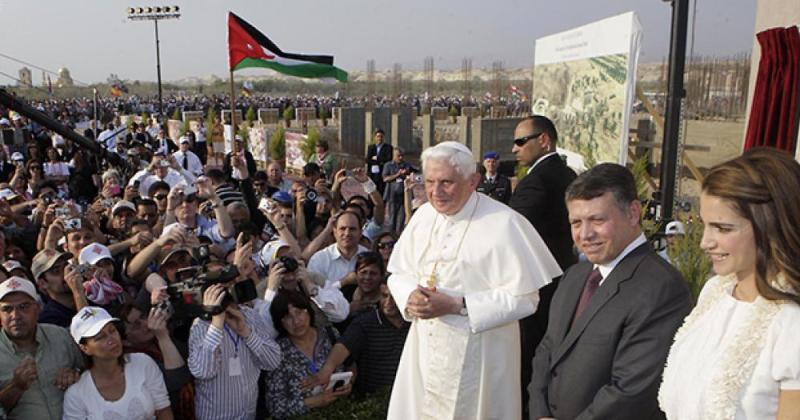