You are the salt of the Earth: trust, testimony, and role

“You are the salt of the earth, but if the salt loses its value, with what will it be salted? (Matthew 5:13).

The Incarnate Master said this to his disciples while he was preaching to the multitudes that came to the mountain.

It is important for us to stop today in front of this saying and extract meaning from the timeless sermon through which the master summarized the ethical, behavioral and social lifestyle that the human race should adopt.

You are the salt of the earth!

How symbolic is this saying, and how great is the historical, social as well as humane calling to which the Master's companions have been entrusted with.

You are the leaven of righteousness, He says to them, and the matter of the universe will not be safeguarded unless you practice my teachings in your daily life and in your relations with others based on the values and ways of life I have brought to you.

The world in crisis today is in dire need of drawing inspiration from these teachings, starting with the Sermon on the Mount and ending with the testimony on the cross loaded with forgiveness.

You are the salt of the Earth!

How balanced is this “burden”, which the Master places on the shoulders of his disciples, knowing that their shoulders are the shoulders of mighty men, as their forearms, which moved the oars of the evangelization boats to the world, are the arms of messengers that do not know fatigue.

How precious is this trust, which the incarnate master places in the hands of his disciples, knowing with certainty that the lit lamp will not be under the table, but will illuminate the world and be its light.

Are you the salt of the Earth?

It is a three-word commandment that sums up volumes. It is a way of life, an approach to learning and education, and a path for humanity that is still lost in trivialities and selfishness.

But if the salt loses its flavor!

If the yeast of righteousness and the system of values are corrupted, what will fix it? What salt is salted if it loses its flavor, and with what will its flavor be restored?

The Master, who rebelled against the temple merchants and against perdition, predicted that humanity would reach predicaments in its history, one of which we are experiencing today.

How many times has the Master reminded  us of the social ruin that humanity will endure?

His "fear" was that the salt would lose its flavor and no longer be able to fulfill its role of improving life on earth, so that humanity will have a better life.

The Master warned against the corruption of salt, which will result in the human race becoming an orphaned, with no reference, no aspirations, no justice, no peace, thereby, with no dignity.

As for the culmination of the tragedy, is w that the salt is thrown out and trampled down by people! It will truly be a tragedy when the goodness of life becomes a substance that has no place or no bearing  in a person's life. We would have reached rock bottom.

Christianity that bears the belief in the salt of the earth as the very constitution of life, has not and will not reach this level of decadence. It harbors  enough strength of faith, impetus  of renewal and solidity of ingredients to remain a beacon to humanity, the salt of the earth, in which the very foundation of steadfastness and value of human civilization is preserved.

Two thousand years have elapsed since the Sermon on the Mount, and after centuries of persecution, massacres, and attempts at extermination, the salt of the earth is still the same, making life good, making it better, and giving it a better meaning.

Millions of believers have carried the trust and walked by it in rugged, narrow and dangerous paths, just as the master expected, and they passed it on to generations and generations, and they are still witnessing through it to truth, goodness and beauty.

Those whom the Master called the salt of the earth were able to deal with dangers, warnings, and conspiracies through the wisdom that He commanded them, and they also knew how to deal with malice, grudges and hatred through the love that the He embodied.

The most important thing that is required of the salt of the earth is that it remain salt of the earth, fulfilling the role that humanity requires of it, the role in which humanity needs it, thus making its present good and illuminating the path of the future time.

The salt of the earth is a trust, testimony and role!

It is the pledge of allegiance that the gates of Hell will not prevail against! 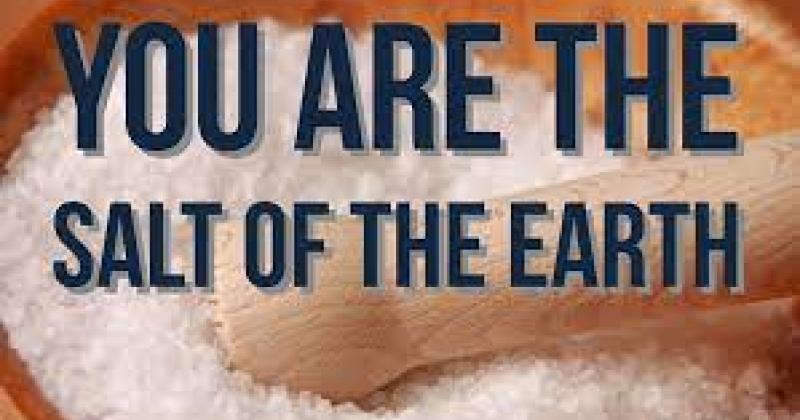