What does the future hold for Middle East's imperiled Christian communities?

Questions and analyses continue to discuss issues relevant to the conditions experienced by Middle East Christians while trying to find answers to what the future holds for them with reports that are at once optimistic and at others pessimistic, at a time when several regional countries suffer from civil wars, instabilities, and social problems with gargantuan proportions.

While several Middle Eastern countries  suffer  from continued instability, the future of the Middle East Christians remains in the balance. It is a maze of unpredictable obscurity. The prevailing adversary conditions which include poverty, unemployment, and violence do not augur well for the people striving to live in peace as the  prevailing turbulent situations that have ripped through the region wreak irreversible damage.

Amid a situation where Middle East Christian communities feel imperiled and unsure what the future holds for them, Janine Di Giovanni launched her new and latest book “The Vanishing: Faith, Loss, and the Twilight of Christianity in the Land of the Prophets”  which examines the plight and potential disappearance of Christian communities across Iraq, Syria, Egypt, and Palestine. She documents the experiences of individuals determined to practise their faith and preserve their ancient traditions while constantly under threat.

Janine Di Giovanni was reporting from Iraq in the months before the U.S. invasion in 2003 when she traveled to the northern city of Mosul. There, she discovered an ancient community of Christians who prayed in Aramaic, the language of Jesus. The people she met were frightened by the prospect of the coming war, but were also committed to staying in their homeland despite the hardships to come. She said that she was "so touched by their resilience and how they had clung to their faith and their land for 2,000 years despite periods of repression."

In a recent interview with Di Giovanni, recently conducted by Mike Cummings, she delves into the intricate situation of the  Christian communities in the Middle East. Following are excerpts of the interview posted on news.yale.edu:

What sort of peril are the Christian communities you write about encountering?

Many Christians in the region have encountered violent extremist groups that want to exterminate them. In Iraq and Syria, the ISIS militants wanted to wipe Christians off the face of the Earth. They subjugated them and forced them to convert or be killed. They enslaved women. They burnt their farms and villages. They reduced their churches to rubble.

In Egypt, laws prevent Coptic Orthodox Christians from building churches. It’s not like in the United States where a decline in Christianity is simply a matter of young people not going to church. It’s a direct and often violent assault on an ancient people who have inhabited that land for 2,000 years. They’re like the martyrs in the Roman times.

Climate change also is a factor. According to the United Nations, Iraq is facing rising temperatures, declining rainfall, and more frequent sandstorms. Most of the Christians there are farmers, so their livelihoods are under threat from the changing climate. They’re leaving as a result. This is true across the Middle East. If current trends continue, there will be no Christians in the region within 100 years.

You interviewed hundreds of people from Christian communities across the Middle East. Do any stories or experiences stand out to you?

There are so many. There was a young man in Cairo who belongs to a Christian Copt community in which people make their living picking garbage. He told me how while growing up, he always felt like “the other.”

I also think of the Christians in Gaza who are caught between the Israeli siege and the rule of Hamas. Due to the severe travel restrictions placed on Palestinians, they can’t leave Gaza to visit Bethlehem at Christmas.

And I think of an ancient monastery in Iraq that I visited one evening. It was about six o'clock, maybe later, and the sun was setting. I heard this ethereal singing. I entered the monastery and found a room where a Chaldean monk was chanting in Aramaic. It was the evensong, which is the evening prayer. He sat with me and spoke to me about faith and about being rooted to this land and how vital it was that Christian people remain there. I recall the Christians who told me about how they fled ISIS, taking nothing and leaving their homes in the middle of the night. I have many, many striking memories of the people I met.

What would be lost if Christian communities were to entirely disappear from Iraq, Syria, Egypt, and Gaza — the places you cover in the book?

They will lose a crucial part of their cultural and social mosaic. Christians are important minorities groups in these places — ones with roots tracing back 2,000 years. The Jewish community has disappeared in Iraq, leaving a deep hole in the country’s social fabric. The people I wrote about are facing the same bleak future, but they form a rich part of their countries’ cultural heritage. One Iraqi politician told me that an Iraq without the Christians is no longer Iraq.

In the book, you reflect on the meaning of faith. What can non-believers draw from those reflections?

The book is about faith, not religion, and I wrote it for believers and non-believers. I think it will appeal to anyone searching for meaning in these difficult times. I have many friends who don’t believe in God or aren’t religious, but during the pandemic, they desperately wanted to believe in something. The world was spiraling into uncertainty. 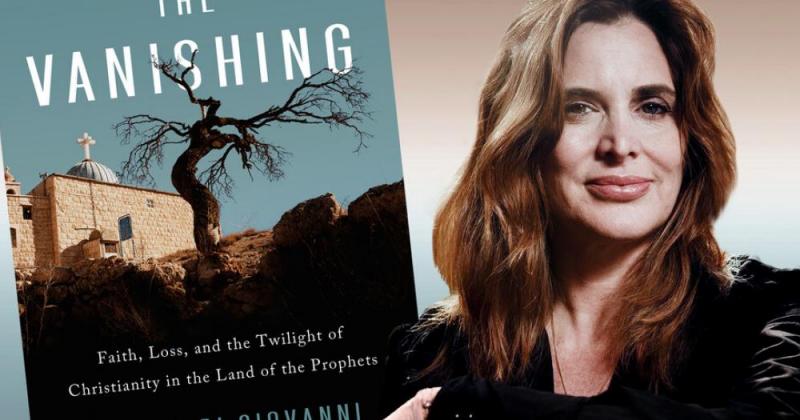