Good news has emerged from the Holy See which is worth joy and jubilation. It is the announcement that a new Vatican foundation was launched on  October 21, 2021 by Cardinal Gambetti designed to put social justice, solidarity and the construction of the common good at centre-stage.

Cardinal Mauro Gambetti noted that the establishment of “Fratelli tutti” Foundation aims "to promote and support sustainable growth and a new humanism and provide a workshop for the future." He added that this foundation will "provide the tools to realize an integral humanism in a synodal way, integrating the contribution of each party according to its own area of commitment and competence."

According to Cardinal Gambetti, the “Fratelli tutti” Foundation will focus on at least three major areas of action, namely the area that pertains to art; an area that will deal with formation and training; and one that promotes dialogue between peoples, cultures and religions.

On June 5, 2021 the Catholic Center for Studies and Media (CCSM) in Jordan held a conference, in cooperation with Caritas Jordan, titled, "We Are All Brothers (Fratelli Tutti): On the Enhancement of the Culture of Brotherhood and Solidarity."

In the opening address, CCSM Director Fr. Dr. Rif'at Bader said: "What we need is to enroot and deepen a genuine culture that helps in the process of construction and that heralds goodness in the future. It is the culture that instills grace which transcends simple hope so that humans can envisage a dignified, free, and creative life pertaining to all areas of life."

He added, "The encyclical (Fratelli tutti) calls for respecting the sanctity of life from the moment of conception to the moment natural dearth. It calls for stopping wars and promoting the values of forgiveness and peace, so that human beings can 'jointly' confront the mistakes that threaten the global family, such as the current virus, Covid-19, as well as all other social viruses such as climate change, unemployment, poverty, and the issues relevant to refugees and the forcibly displaced."

In a resounding statement, Grand Imam of Al-Azhar Professor Ahmad Muhammad Al-Tayeb referred to the Encyclical "Fratelli tutti" saying that “it is definitely of huge importance, especially in this time, for both Muslims and non-Muslims.”  And added that it is “an appeal to apply the moral principles of religions to create a true fraternity where there is no room for discrimination on the basis of differences of religion, confession, race, gender, or other forms of intolerance."

This encyclical is of great importance as it facilitates to the world population access to grasp its invaluable ideas and to consider it as a basis for creating societies that promote fraternity, social friendship, and well-being. In this regard it is necessary to have the United Nations and other international organizations endorse this encyclical as part of their charters, to present it to the world population as a sign of divine message addressing brotherly love, to assign a day annually to mark this encyclical, and to disseminate its noble ideas which alleviate prevailing disasters that wreak havoc in various parts of the world.

Many thanks go to the Holy See for launching the ”Fratelli tutti” foundation at this critical time, as it helps entrench the values of brotherly love, that has been missing for a long time, and encourages sowing the seeds of fraternity, peace, and cooperation.

In this context it is important to note that the ”Fratelli tutti” goes in line with the teachings of Lord Jesus Christ Who said, "A new command I give you: Love one another. As I have loved you," (John 13:34) 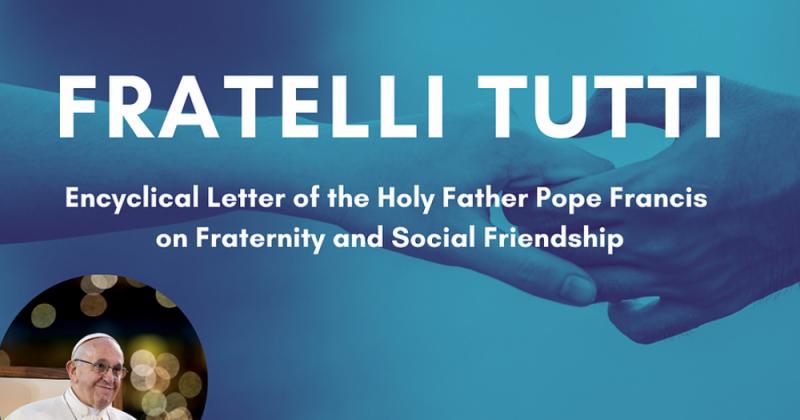