A real-life event: A Marian miracle

Reports have regularly been circulated from time to time about miracles taking place by Our Lady of Lourdes. In 2018, on the 160th anniversary of the apparition, Sister Bernadette’s healing was declared as the 70th official miracle effected at Lourdes.

Franciscan Oblate Sister of the Sacred Heart Bernadette Moriau made the round trip journey for her 2008 Lourdes pilgrimage. At the time, she was transported from her French convent in an ambulance train car designated for the sick visiting the Marian shrine where the Blessed Virgin appeared in 1858.

For 42 years, Sister Bernadette had a painful degenerative disease of the spine which slowly wrought havoc on her body as she suffered from sleepless nights with agony. In 2008, she was reduced to a state of powerlessness that left her dependent on others.

She recently released a memoir titled, “My Life is a Miracle”, which traces the astonishing events that brought her case to the world’s attention as the 70th miracle that took place at Lourdes. In her memoir she describes her left foot as almost completely twisted in a “backward position.” And her “back, spine, and pelvis were like jelly,” supported by a “rigid cervical-lumbar corset.” Day and night her body ached, even as electric shocks rippled through her legs.

Sister Bernadette made the agonizing return trip. Within days of her return from Lourdes, Sister Bernadette experienced a sudden cessation of pain and a complete healing of her body, or  as she calls it  a “re-creation.” Her twisted foot had been straightened, and her back was strong. The degenerative disease that had defined her life for four decades had itself been rendered powerless through a miracle.

On February 11, 2018, Sister Bernadette’s healing was declared the 70th official miracle that took place at Lourdes. Following her recovery, she said: “I survived a forty-two-year struggle. But that was a sign from God, a visible sign of His love for all of us.”

WHY SOME PEOPLE SUFFER FROM DISABILITIES?

There is a question that keeps persistently looking for an answer with people having difficulties finding the answer. Why some people are born with deformities or why do they suffer from certain chronic diseases as they advance in age?

The Holy Bible according to John says: “As He went along, he saw a man blind from birth. His disciples asked him, ‘Rabbi, who sinned, this man or his parents, that he was born blind?’ Neither this man nor his parents sinned,’ said Jesus, ‘but this happened so that the works of God might be displayed in him. As long as it is day, we must do the works of him who sent me. Night is coming, when no one can work. While I am in the world, I am the light of the world.’  After saying this, he spit on the ground, made some mud with the saliva, and put it on the man’s eyes. ‘Go,’ he told him, ‘Wash in the Pool of Siloam.’ So the man went and washed, and came home seeing.” (John 9)

In other words, people’s illnesses can serve as a manifestation of Lord Jesus’ love and mercy for those who seek His tender touch that seeking His salvation and healing. Prayers are always answered and the Lord never fails those who sincerely seek His healing touch.

It is also important to address Blessed Mary saying, “O Blessed Mary, You are the fruitful vine, splendor of Heaven, Blessed Mother of the Prince of Peace and Savior of the world, we ask you to assist all humans in their necessity, as well as help spread peace and love in the world. Thank you for healing our ailments, and for all your intercessions and prayers. Thank you for the courage and strength you have given us this year.”

Blessed Mary, You are our loving mother whom we trust. We seek Your intercession all the time. 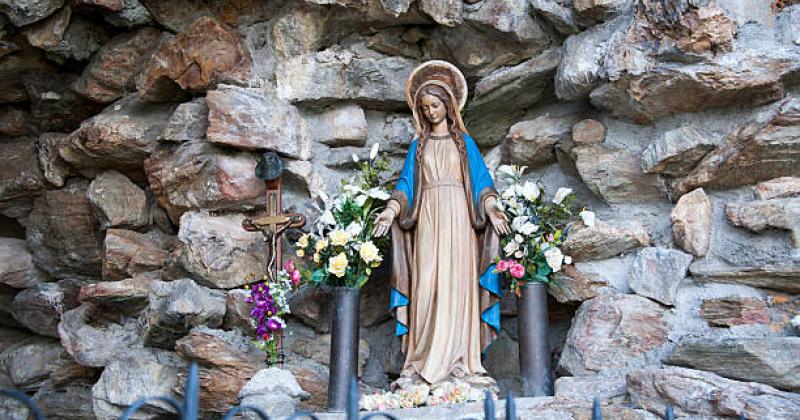