This is my story and that of my family. It is also a shared narrative of thousands of other Palestinian families who experienced dispossession and as result became refugees in 1948.

I am from the neighborhood of Talbiyeh in West Jerusalem, and today I am a refugee and internally displaced in my own city.

At that time, I was too young to understand the calamities that were hiding just around the corner. I could not explain the silent glances between my father and mother. Those haunting looks clouded the otherwise happy, content, and hardworking household.

All I knew was that my parents took us to our winter home in Jericho for our security, a word I did not grasp then, as I had all the safety I needed provided by my family. You see, our home was the second building next to Saint Antonio Convent, which was at that time the headquarters of the British army. One day, my parents were away at a wedding in Jaffa and I was not able to join them because I was ill. But as a consolation they allowed me to sleep in their own bed, under the care of my grandparents. That night, a bomb planted in our garden exploded, shattering and breaking all the windows. I remember being terrified, covered in glass, and my uncle wrapping me in a blanket and running outside.

When I was older, my parents told me the full story according to the British investigation. The Haganah planted the bomb as a warning to the British to conduct a thorough search. My family rented a studio to a Jewish student who apparently belonged to the Irgun. His mission was to detonate a bomb, which was found under his bed and which was huge enough to destroy our home and the nearby house and convent.

While taking refuge in Jericho, my father started to repair the damage so that we could return. One day, soon afterwards, we learned that we would not be allowed to go back. Through it all I cried nonstop. I wanted my only doll that was left behind in Talbiyeh. I could not comprehend why my father, my rock, the symbol of strength and power, who never denied me anything, could not grant me my simple wish. Through shattered lives and shattered dreams, I will always wonder who hugged my doll and slept in the comfort of my bed.

It pains me till today to remember how my parents had to rebuild their lives, how hard they worked, and the sacrifices they made to make us feel safe and secure.

A few months after the war of June 1967, my mother-in-law, Jamileh Calis Habesch, also a refugee from Talbiyeh, called me one afternoon to ask me to pick her up early the next day. Without asking, I assumed she wanted a ride to one of her volunteer activities that were much needed after the devastation of another war. I arrived at her house only to find her elegantly dressed and looking majestic. She entered the car with a very solemn face and in a gentle yet demanding voice, she said, “Drive. We are going home.” In a voice that betrayed my emotions, I told her that I didn’t know the way. She gave the initial directions, but once we arrived at the King David Hotel, I was overwhelmed with memories, with images, even with familiar smells of my childhood unjustly robbed from me. The fountain in my garden, the sound of the water, our afternoon snack known as asrouneh in Arabic, and thousands of other details made my heart beat stronger and my eyesight blur with tears. I was amazed at how my mother-in-law remained composed, but I did not need her to show me the way. I, too, was going home, but as a stranger! Driving up towards Salameh Square, the Habesch home came into full few. Taking a deep breath, my mother-in-law uttered triumphantly in Arabic, “Thank God, thank God.” My brash response was, “Why, because the stones are there?” Her answer was “You’d better shut up.”

And thus begins our story of the Mulberry Tree.

The family in front of the stolen house and the mulberry tree before it was chopped down.

On the day that my late husband Issa was born, June 19, 1932, his father Tewfic Habesch planted a mulberry tree in the garden of his Talbiyeh home as a symbol of gratitude. He nurtured both his son and the tree. Many gatherings were held with family and friends under the shade of the mulberry tree, especially in the early summer to enjoy its succulent fruit. That tree became a symbol to the family and a living hope of return as the tree continued to bear fruit in abundance. It was exactly what my mother-in-law wanted to see.

When my husband passed away in February of this year and prior to the funeral service, the family took him on his final journey to his home in Talbiyeh, not only to honor his legacy but also to pass on the torch to his children and grandchildren. In a simple ceremony full of symbolism, a big black ribbon was tied around the mulberry tree to bid him a final farewell.

On his birthday this year, on June 19, in celebration of his life, the family went to lay flowers next to the mulberry tree, only to find it chopped down. Sadly, the tree did not survive beyond its 89 years as though it were inextricably connected to my husband. I felt that another piece of me had been ripped out, again. I felt a strange pain in my heart. I could not cry. The tears did not come. But how could they when I was suffocating with emotion? Was I missing Issa or was I mourning the loss of a homeland? We wonder as to the reason or reasons for attacking symbols of our collective history and memory. Is a tree with a black ribbon a threat to the existence of the families who live in our homes, which were taken away from us, their rightful owners in 1948? I wonder!

My grandsons found green shoots on the side of the trunk, as if the tree were saying, “I refuse to go away, and I will stand as a testimony to the injustice.” They took shoots in an attempt to try to re-grow the tree, and hopefully one day they will plant it where its mother once stood in resilience.

They couldn’t stand the fact that we have not forgotten, so they chopped down the mulberry tree.

Even after 73 years, the injustice prevails, and though those years seem so long ago, the memories and pain are still alive. As long as our story and our cause are just and right, my children, grandchildren, and great-grandchildren will continue to tell the story of the Immortal Mulberry Tree. 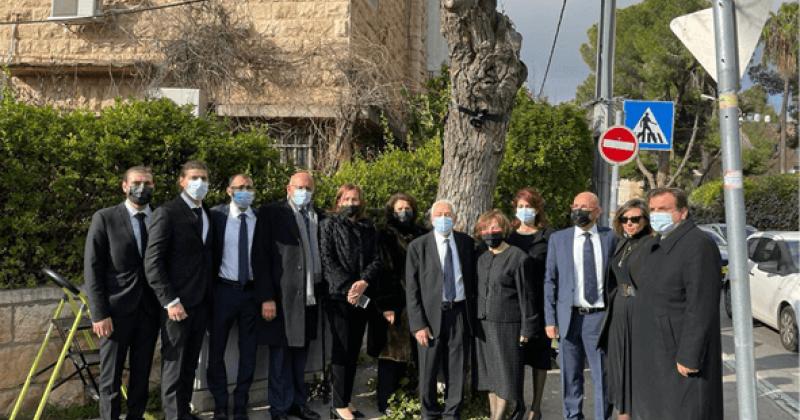