Love your neighbor. Everything depends on it

Catholics who are still committed to going to Mass have proved one thing very well: We love God. We love Him a lot. We love Him against all odds.

Now, to be right with God, we just need to take one more crucial step: We have to figure out how to love our neighbor — even when our neighbor is an enemy of our faith.

First, to give credit where credit is due, what we who have done is nearly miraculous: We have remained faithful to God not just when it’s easy, but when it’s hard. Really hard.

What we have done is no small thing, and this situation has given many of us something like Post-Traumatic Stress Disorder where we feel like enough is enough and we can give no more.

But don’t forget that every age has had to love God and his Church this way. Jesus was the victim of religious leaders, and sold out, denied or abandoned by all of his apostles except John. Paul had to chastise the Christian leaders of communities from Rome to Galatia for terrible infighting and even had to “oppose Peter to his face.” And on it continued from the Christological heresies to the Great Schism to the Reformation to our own fractured times.

In fact, every saint is a saint despite disappointment with or rejection by Church leaders to greater or lesser degree — saints have been enslaved by other Christians, locked up by their own religious orders, rejected by their flocks for the color of their skin, and killed by firing squad and gas chamber in predominantly Christian nations.

So, what we U.S. Catholics have done is good but not unique. Loving a disappointing Church is the vocation of every Catholic. It always has been so and it will be until the trumpet sounds and the dead arise.

Now we have to do the other thing generations of Catholics have done. Alongside the story of bitter disappointment in the Church’s history is the story of Christians who refused to be bitter. They overcame by focusing on what matters most: loving God and loving one’s neighbor.

Why must we love our neighbor?

First, because we will be judged — solely — on whether or not we loved God and neighbor. In Matthew’s 25th chapter those who invested their talents and fed, clothed and welcomed their neighbor are saved; those who didn’t are damned.

Second, we must be capable of influencing our neighbor in order to do the one task Jesus gave us as he departed at the Ascension: To be his witnesses to the ends of the earth and to “make disciples of all nations” baptizing them and “teaching them to observe all I have commanded you.”

Third, we must love our neighbor because lack of love is literally killing them: an epidemic of loneliness is fueling depression and anxiety; an epidemic of hopelessness has pushed suicide and “deaths of despair” to record levels; and a refusal to embrace the truth is causing people to make irrevocably self-destructive choices.

You know all of that, and so do I. But I have a really hard time loving my neighbor all the same and you might, too.

See if the problems I personally suffer from sound familiar to you:

First, I find myself feeling mostly rage and contempt for people who work against the right to life of infants.

Second, the abject hypocrisy of the dominant players in news and social media makes me so mad I end up sounding like a raving lunatic to my family.

Third, I have squirreled myself into an increasingly well-fortified bubble of people who share my worldview in order to keep my sanity — only to find that this has made it harder than ever to love people outside it.

So, how do I get out of this hole I am in? That’s what I want to explore, and invite you to explore with me. Here are the kind of topics this series will cover:

Community in the post-pandemic world. Already before the pandemic, wise prognosticators were arguing that the “meeting people on screens” culture had reached an absurd point and a backlash would begin. After the Year of ZOOM, this is even more the case. Christians should be ready to go.

The Coptic Christians who loved ISIS. The families of the Christian laborers who were beheaded in Libya have accomplished something extraordinary: Love and forgiveness of monsters. How?

Dying from lack of love. One man who jumped off a bridge to his death left behind a note that said, “If anyone smiles at me on the way to the bridge I won’t jump.” Who on our street is thinking that way?

Love your politically opposite family. We all need to relearn what to do with competing truth claims and how to win over those who seem utterly opposed to us. Christianity gives us the ability to be both confident and humble in pursuing truth.

Let’s celebrate our neighbors. “The world” gets a lot wrong that Catholics point out. But they also get a lot right that we can agree with — and tweak: Like concern for the marginalized, concern for the environment, concern for authenticity and transparency, and refusal to accept easy answers.

We are about to win. Let’s stop being embarrassed about the Church and stop thinking of our neighbors as bad guys who we need to hide from, defeat, or ignore. Not only does the Church still have the truth, but the world has gotten it so disastrously wrong that — just like you — your neighbor can’t help but notice. And just in time, from Ascension to Word on Fire, from EWTN to Formed, we live in the time and place that has better, more professional, more comprehensive, more accessible Catholic content than anywhere else in the history of the world. It’s like we have a dozen Fulton Sheens one of whom your neighbor will truly connect with.

The only thing delaying the final victory is you and me, waiting to reach out. Let’s begin. 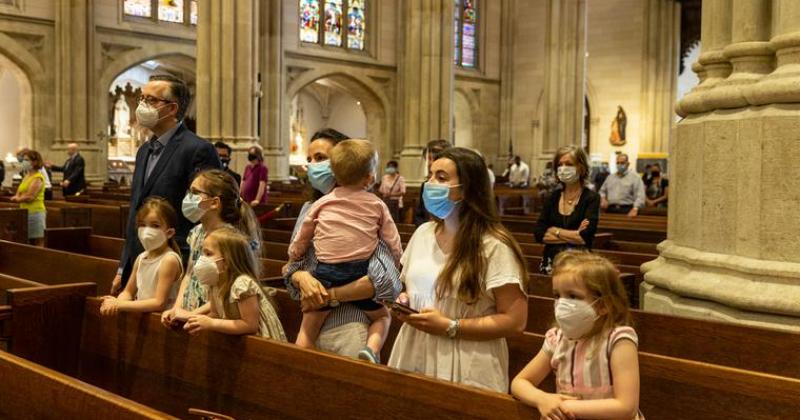