The looted land has its shepherd

Difficult is parting, bitter in taste, painful, leaving scars that may not heal.

For Metropolitan Paul Yazigi and Metropolitan Youhanna Ibrahim to be absent is one thing, and to acknowledge that they may not return is another thing.

There is no doubt that the decision taken by the Holy Synod of Antioch to transfer Metropolitan Paul Yazigi to the honorary post of Metropolitan the diocese of Diyarbakir, given the passage of nearly nine years since his absence, is a practical and realistic decision, but it is a decision that emerged from the depth of the suffering felt by the absence of the two shepherds whose fate was deemed unknown to all military, political, legal as well as media references. Nine years and no move of goodwill volunteered to benefit any information about the fate of the kidnapped, be it just as an expression of humane concern. It is the rubdown of revenge after the murder.

The Diocese of Aleppo, Alexandretta and their dependencies cannot remain without a shepherd present in-person with his parishioners, despite the fact that believers have constantly remained inspired by the sermons, writings and hymns of the loving pastor who has never been forgotten.

An absentee metropolitan has been appointed to  a looted diocesan  land.

Honorary Metropolitan of the diocese of Diyarbakir! The land of Diyarbakir is not alone to have honorary connotation attached to it, in the sense that its people have been displaced to faraway lands, but the whole Tur Abdeen too. “Tur Abdeen” or the “Worshipers’ Mount” is the birthplace of faith, of asceticism as well as of culture. Tur Abdeen is an area in which blood had been spread into the seas to such an extent that its identity had been forced to change overnight under the weight of the “Seifo” or “Sword” of the Syriac massacres.

Tur Abdeen simulates Hakkari, the homeland of the Assyrians and Chaldeans, and simulates Cilicia, where the Armenians were massacred and Anatolia where Romaïons were slaughtered. All of these lands bear witness to the displacement, killing and captivity of nearly five million people guilty  only for having been in their place at the wrong time.

How ingrate is the human race to a civilization that gave them knowledge and culture, as they repaid it with an act of extermination!

The election of Bishop Ephraim Maalouli, Patriarchal Assistant and Secretary of the Holy Antiochian Synod, as metropolitan over the diocese of Aleppo, Alexandretta, and their dependencies, comes at a time when the north of the Antiochian Levant, with its ruined capital, Aleppo al-Shahba, is trying to heal its wounds and restore some of its normal life, while it is still bleeding blood, people and resources. The election of the beloved bishop comes at a time when the parish needs a shepherd who is always present with it. It conveys to him her chest and her suffering, and he consoles her, guides her, and extends a helping hand to her. What awaits Metropolitan Ephrem is not insignificantly small, as he has to redeem lost time, gather the displaced flock, and restore the threatened identity.

Metropolitan of Iskenderun: stop for a while and get to hear what Iskenderun is. Get to know its history and the suffering of its people.

Alexandretta or Iskenderun, the occupied department, which was stripped from its main body, and which embraces Antioch, the historical capital of Christianity, where the disciples were first called Christians.

Iskenderun is located at the foot of Mount Amanos, the stepbrother of Mount Lebanon, the neighbor of Cilicia, the incubator of Adana, Mersin, Seyhan and Tarsus, the companion of the Aintab plateau, whose citadel imitates the citadel of Aleppo, Edessa and Nusaybin, where the roots of a world-wide civilization were uprooted.

Blessed be His Beatitude Patriarch John X Yazigi, Patriarch of Loving Wisdom, who transcended his pain with his faith and pastorally headed the Holy Synod to choose Metropolitan Ephrem as the patron of this diocese, filling the void incumbent in its leadership.

Blessed be the Holy Synod that took the decision.

Blessed be the Shepherd Elect. 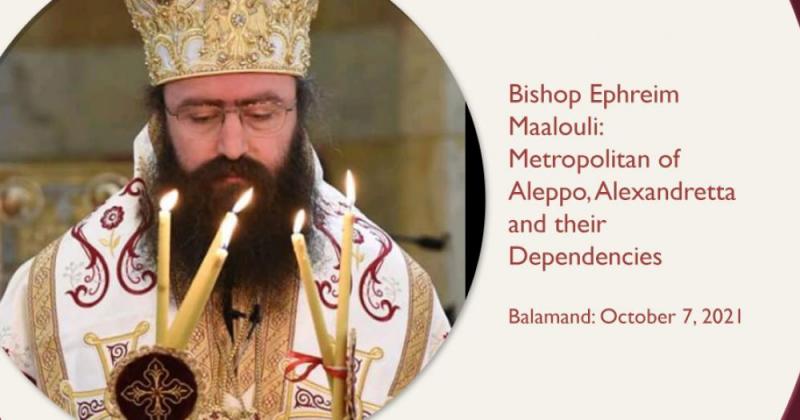